A week had passed since then and Ace was quite relaxed. The new season had already begun but none of the new contestants were even close to qualifying for his Liberator tournament.
So instead, Ace had a lot of spare time on his hands to training and exercise at the DZ Gym. He liked to spend most of his time staying in shape; sometimes even more so than actually competing in the challenges. He thought the DZ challenges were somewhat boring and repetitive, after participating in them for almost 6 years. He only found it fun when there was a contestant or two involved, so that he could have the pleasure of finishing them off at the end of the course.

Ace often preferred to exercise by himself in his private suite but the main DZ Gym had more room and more obstacles and equipment for training with. Other fitness trainers were present but nobody would talk with Ace, ever since the incident at the DZ bar n Grill a few weeks back, where he killed two of the trainers out of rage.
The remaining fitness trainers were afraid of him and some would even leave in a hurry when Ace was present. None would even greet him, fearing that they would get on his nerves so, instead, they kept to themselves to avoid any conflict.
Ace was seen on his own, kickboxing a decoy in the corner of the gym. Ace was even wearing his usual outfit and armour, presumably so that he could stay used to having all the extra heavy weight on his upper body. He never ventured out of his apartment suite without his armour on.
He enjoyed training either way; striking the decoy many times with a punch and occasional kick, until it became so damaged that he needed to get it replaced.
He continued to perform his attacks, until he got an unexpected call from Vox. The light on his wrist armour started flashing and beeping, and a message displayed from inside his visor, informing him that he had to immediately go to Gleeman’s office.

”Oh man. What does he want this time?”

He sighed and stopped moving for a moment to catch his breath. He looked over towards the entry and immediately took off, heading towards the main elevator shaft.

Arriving there quickly, Ace walked up to Gleeman’s desk, looking slightly annoyed after being called in at such a random time. He also noticed that there were many crates in here; with his own Hardlight logo imprinted on each crate. He assumed the boxes were all filled with some of the new Hardlight merchandise being sold.
He stood there before the desk, playing with his hair as he found himself to be bored with Vox’s silence and Slugga’s continuous stare, so he said…

”Oh well far be it for me to keep the superstar Exterminator from his busy social schedule! I just have one question for you…”

Ace replied, swaying his hair out of his face as Vox moved his cybernetic arm, preparing to display holograms for him to view,

Ace smiled and nodded as Vox showed the holograms of his products. Vox swiftly turned around to switch on his main holovision screen, as Ace continued to keep watch of Vox, folding his arms in content.

“Ace Hardlight is the perfectly manufactured celebrity, straight from the presses of the Gleeman Vox media empire. So TELL me… why is it that I can’t GIVE this stuff away!?”

Ace was sort of speechless for a moment; but replied,

”Wait don’t answer that; let me take a wild guess… It’s because my fans can’t STAND ACE HARDLIGHT!!! He’s a pompous ASS, with a charisma of Blargian gnat cheese!!!!” 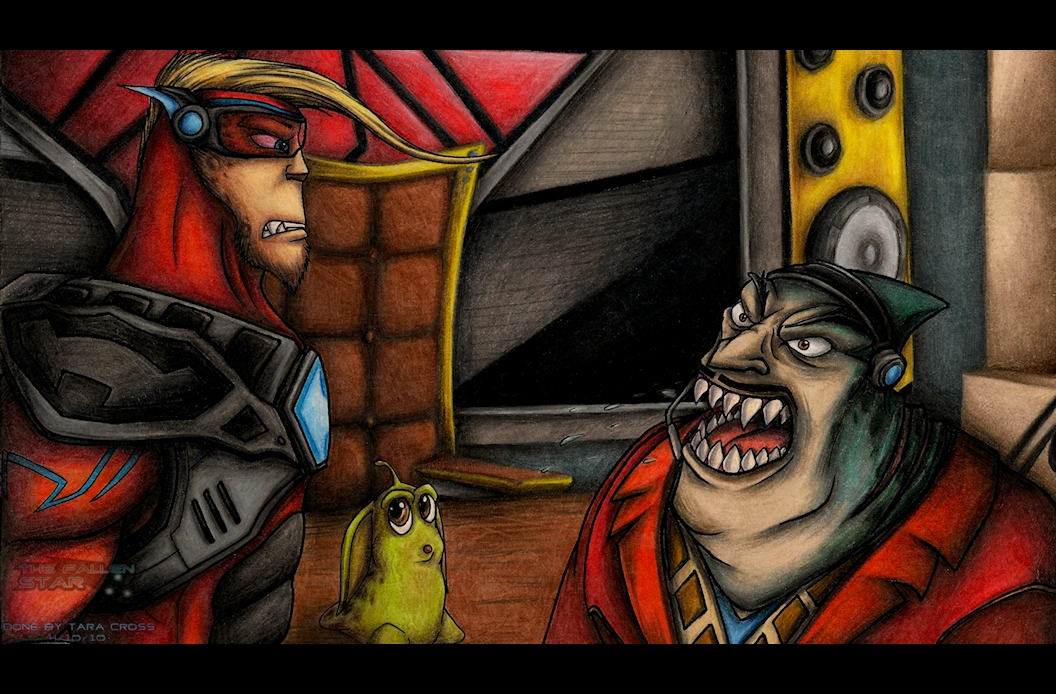 He screamed, slamming his fist down on the desk as he stood up to look Ace in the eye with anger. Ace was startled, unsure with what was upsetting Vox,

”So… what are you saying, exactly?”

”ZIP IT, Wonderboy! The little Billy’s and Suzy’s of the world are spending a trillion bolts a day, on worthless SCHWAG! And I’m completely cut out of the market!!!”

Ace was stunned with the reaction, standing back as Vox kept on yelling in his face, despite Vox being quite a lot shorter than him. Vox stood up straight and snatched Ace by the hair! He pulling on his hair tight, down to his level so that he should continue shouting head on-

”Either you start selling this junk, or I’ll find someone who WILL. Now… GET OUT OF MY SIGHT!!!”

Vox screamed again, releasing Ace’s hair from his grasp, and Ace hastily moved away; quite gobsmacked at what had just happened. He rushed out of the office quickly, as he came to realize how much Vox had just ticked him off.

”Man, what got stuck up his gills today…!”

Ace murmured to himself annoyingly, while trying to tidy up his hair after Vox had pulled on it roughly. He walked down the hallway, still thinking with himself and curious as to why none of the products were selling, according to Vox.

Ace thought. He headed back towards the gym, to resume with his daily exercise routine.