Chapter 16: At the Vox Casino

After meeting the lombax, Ace was quick to get his focus back on the DreadZone challenges. He still had quite a lot of remaining dreadpoints from last season; the Exterminators had the privilege to keep some of the points from their hero kills in the previous term.
But after Ace checked the DreadZone rankings, he was a bit surprised to see that Ratchet had passed even more contestants - not just Shellshock. He was coming close to Reactor’s dreadpoint amount, closer as each day passed by.
Ace participated in any available challenges in the Battledome, or on another planet. None of the other contestants were close to qualifying for his tournament yet, so he had to find other ways to gain more points.
Desperate to rake up as many points as he can, he spent the next few days continuously competing, with very little rest as determination and insomnotech kept him wide awake. He wouldn’t stop until he was satisfied to see that he had over twice as many dreadpoints as the lombax did, after he checked up on the contestant ranking board.

”Heh. Now there is no way that rat can get near my rank”

He said to himself, giving off a smirk.
However, he did know for a fact that the lombax was close to qualifying for the Crusader Tournament; the one which allows contestants to fight against Reactor. Thinking to himself, Ace looked up and wondered if Reactor would be willing to take on this new contestant. He headed off to the west of the station, the area in which the Vox Space Casino was located.

Arriving through a vast entrance, many people were seen in here and lights were flashing all about. Large neon signs displayed high above in the expansive room, advertising Vox related products. Several large Holovision screens for DreadZone displayed current contestants fighting on live HV, and customers could place bets on gladiators for cash prizes. There were also pokey-machines, pool tables, a pub and Blargian roulette near the centre of the room.
The staff members around here weren’t as excited to see Ace as they usually would be. The fans appeared to be calmer this time round with only a few giving off a wave and a greeting. Ace didn’t care. Sometimes he found overexcited fans to be irritating anyway.

Strolling through the room, he tried to look for one of his Exterminator pals and it didn’t take long for him to notice Reactor’s huge robotic frame standing over near a table in the pub area. Ace walked up to him and Reactor was quick to notice his presence.

”Yo Captain! Haven’t seen you in the past few days, heh”

”Been a bit busy; ensuring that I remain at the top of the board you see”

”Ha, I see. I’m still itching to exterminate another contestant… especially that little squirrel wrapped in tinfoil! He is such a show-off!”

Ace laughed.
“Heh. I suppose you want revenge after what happened last week?”

”Oh hell yeah. He killed my best friend, Shellshock! Now who else can I carpool with? This sucks, majorly! I’ll make sure this little gopher goes down, big time!” Reactor scowled, slamming his fist onto the table.

”Too bad. I wanted to get a chance to exterminate him, for a good laugh. But as they say, first in, first serve…”

”The Eviscerator has been hogging all the kills this season; he cut down 4 contestants already! So it’s my turn tomorrow, to get back at that Ratchet fella!”

Reactor replied to Ace, before drinking some oil he had at the table nearby, with a bowl of metal crisps.
Courtney Gears suddenly came running over to the table where Ace and Reactor were at. She smiled and huddled up close with Reactor, giving a gentle hug while he turned around and gave off a smile; placing his arm around her as well. Ace tried not to pay attention to them as he sat there, watching a HV screen ahead of him; that was showing a challenge with other contestants fighting live.

”Oh Reactor, may I please have some more bolts? I spent a little more than I should have…”

”Oh, I just got a little carried away with the gambling. I’m sorry honey… but I promise I won’t do that again”

Reactor looked a bit unsure and Ace couldn’t help but overhear their conversation. He thought it was quite amusing, but did his best not to show it on his face.
Courtney was a little annoyed, but kept her smile on her face as she looked up at Reactor. She moved up a bit closer to him,

”You know that I still I love you; right Reactor?” 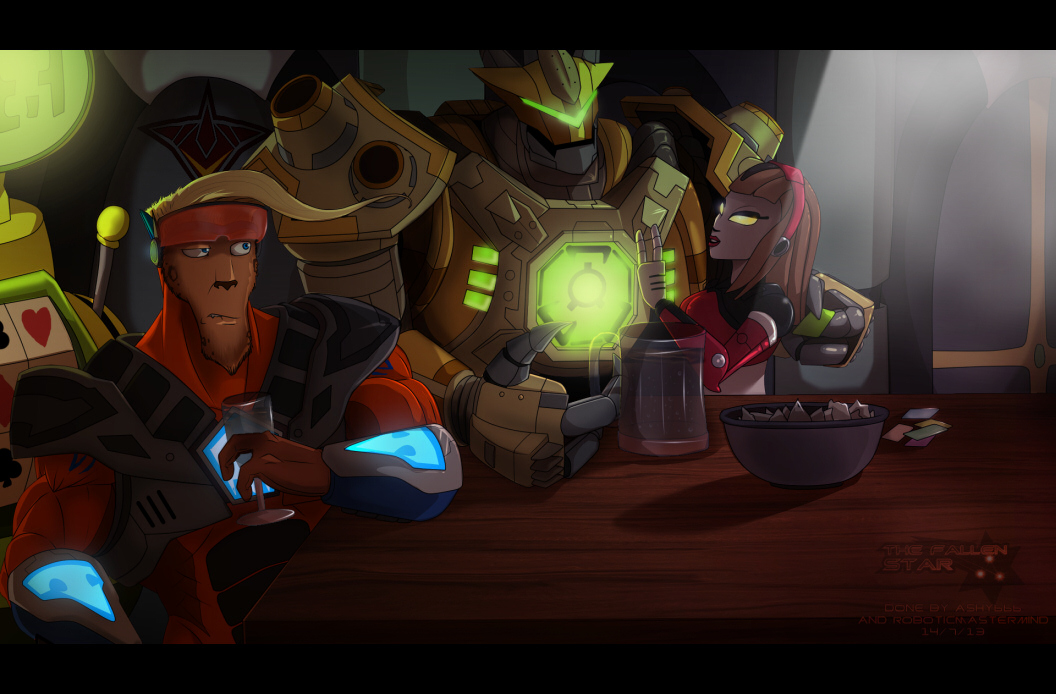 Reactor said, as he handed over a Bolt credit card, loaded with thousands of bolts. Courtney’s expression changed to an excited one, and she gave him a tight hug,

And before Reactor could say anything, she ran off out of sight, skipping in joy as she held onto the card.
Reactor sighed, still happy with her affection. He turned around to Ace and asked him.

”Ain’t I the luckiest guy in the universe?”

Ace let off a cough, trying to hold back his amusement at Reactor’s words.

”Oh nothing. I just find it a kind of odd that she only comes to you when she needs the money…”

”Money? Ha ha yeah, very funny. Hmm, are you becoming a little jealous now ehh? Is Juanita not giving you enough sweet love?”
Reactor laughed, and Ace could only sigh and shake his head slowly, before looking at him,

”What do you mean by that?”

Reactor went blank, and silent. Ace awaited his reply, which took at least a few seconds before he did so.

”What you talkin’ ‘bout? She don’t mine for gold, she’s a pop singer!”

Ace could only go blank now as well. Reactor resumed with drinking what he had left on the table. Ace sighed and got up off the seat, beginning to walk away from the table they were at,

Ace walked away from the casino, as Reactor laughed at his remark.
Only hours after they talked, Reactor was already called in to the Crusader tournament - to come face to face with Ratchet…
And, quite ironically, Reactor was defeated and destroyed in only a matter of minutes, where a robotic funeral would be held the very next day in memory of him.

Ace never saw the fight. Finding out about Reactor’s destruction the very next day was more than enough for him to start thinking about the threat that is Ratchet. Perhaps it was time to start taking him a little more seriously…