Laying in a deep, frozen sleep, it felt as if time had stopped altogether. His body was in standstill; only breathing resumed, perhaps even dreaming. Several days had passed by when the security vessel was finally at its destination, stopping down on a platform, belonging to a planet: industrialized, dark in tone with orange lit skies.

The robotic guards shouted, prodding Ace with an iron pole. Anti-cryosleep gas came out from the vents as the robots continued to nudge Ace to wake. He stirred, moving himself slightly, after breathing in this other type of gas.
He could feel the annoying jabs at the side of the body so he got up, despite feeling drowsy complete with a blurred vision. The security robots roughly lifted him by his arms at each side and left the vessel, encouraging him to be quicker on his feet but he found it hard, still not feeling very well but he tried to walk anyway; glaring ahead and looking extremely irritated. Now he really wanted to know where he was at…

What… is this place? Looks nothing like the Solana Prison Planet… I wonder how long I was out…

He continued to take note of his new surroundings: it was huge, heavily guarded and armoured, with a very distinctive architecture Ace was unfamiliar with. There were many guards and weaponry about, most of which were robots and automated turret tanks. There was also a strange race he had never seen before: small, orange, fish-like aliens with large yellow eyes, floating inside of a tank, built into tall mechanical suits. He also took note of a unique symbol he was new to; a red and gold coloured symbol of royalty.
Ace also noticed that he wasn’t in as much pain as before. The wound on his face was coated in dry blood, forming a scab, and it didn’t feel swollen anymore, which made him realize he must have been in cryosleep for days, to allow some healing. But nonetheless, he still wasn’t well and was clueless on what kind of fate lay ahead of him.

They walked further into the facility, up towards a group of those strange aliens he saw earlier on in the building. The security bots stopped in their steps as so did Ace, with the unfamiliar alien race closing in on them, in their mechanical suits.

”Greetings. We have prisoner 074962, sent from the Triple-S. He is the one who was denied entry to the Solana Prison Planet”

”Yes, we got the message. Murderous criminal celebrities are always welcome here…”

The fish-like creature spoke from a speaker, on the outside of his suit. Ace glared at him, and frowned. Not liking his attitude.

”So, shall we leave him here to be sentenced?”

”Yes, feel free to do so. We ‘specialize’ in the worst of offenders… so we will have him sorted in no time. So that he may never cause any trouble for you and your people again”

”Thank you for your service. We will inform the Triple-S when we return”

The guards nodded and walked off, leaving Ace standing there as the new race of guards came by his side and locked onto both his arms, taking him towards a room ahead of them. The door opened vertically up and slammed down shut again as soon as they were inside the room.

There was a table and a few chairs in here, where the new alien race came to sit down around it while Ace was nudged by a guard behind him to sit down with them.
Ace sat down at the table, with his arms still locked in handcuffs. He wasn’t sure what to say as the alien guards continued to glare at him while sitting at the table.

”So. Your surname is Hardlight, with the first name Ace. Seems you have quite a bad reputation where you come from. We are the drophyd’s, by the way. Proud operators of Zordoom prison, the place where you’ll be likely to spend the rest of your life”

Ace glared at the drophyd in front of him as it spoke. The fish smiled deviously back at him from within its water filled tank, and questioned Ace more…

”So, you’re here for, hmm, let’s see; murder? Killed several famous superheroes I see, interesting. You sure have a colourful criminal record. Heh, you don’t look much like a supervillain to me-”

”I am not a supervillain.”

”Well you’re not a superhero either. Are you, wise-guy?!”

Ace could only turn away now. He continued to give off a frown but he knew that the drophyd was right about him not being a hero.

”I was a gladiator, but… not anymore”

”Right. Well ‘Gladiator’… we need to ask you a few simple questions”

The drophyd stood up straight, as did two others from the sides of the table, all walking over towards him in an intimidating stance. Ace turned his head, keeping his blue eyes locked on the speaking drophyd, as it came in closer to speak with him,

”Do you hold anything against Emperor Percival Tachyon?”

Shouted Ace. The drophyd’s exchanged looks, thinking amongst one another. Ace had no idea who they were talking about. Even so he knew that this ‘Emperor Tachyon’ person must have something to do with this prison, from seeing all those royal symbols around the prison.

”Right. Hardlight, Stand up. You look filthy, so if you’re going to be a prisoner here, you’ll need to wash up and put these on”

Ace stood up and was handed some prisoner clothing. It looked plain - a dark red colour - but clean at least. He was led towards another room of the prison facility, which looked like a large, rusted, bathroom area.

He certainly wasn’t looking forward to this.

Around two hours had passed, and Ace was already in his prison cell. He was placed into solitary confinement, as the drophyd’s believed he may be too dangerous to be housed around other prisoners and guards, judging by his criminal record. He was also given the inmate number of 510D, and an electronic anklet to keep track of his position at all times.
The showers weren’t as bad as he expected. He was glad that it wasn’t like in Solana Prison Planet, where they have to share one huge shower with everybody. Fights and riots would start, usually resulting in prisoners being drowned in the sinks, burned by the dryers and worse. The water here was still quite cold, but he was glad to be able to shower, after almost a week since he left DreadZone.

Zordoom prison was dark, gritty and cold in most areas. The wardens were far more serious here, not tolerating nonsense from any of the prisoners. Although Ace had not come across many other prisoners yet; he did see a few being punished on the spot with electricity, after being questioned about Emperor Tachyon. He had a sneaking suspicion that something was morally wrong with this place, but he didn’t think much of it once as he ended up in the Solitary Confinement area, where his cell was located.

He felt odd being in the Zordoom prison scrubs, being that he was used to his DreadZone outfit. The scrubs were a cheap, cotton-like material and a deep red, that felt very light and loose to what he was used to wearing. It also came with black gloves, most likely for when he had to do prison work.
It was cold and bitter in the sector where he was located in, and there wasn’t much in his cell; a bed that was small, flat and almost as hard as the iron coated walls; a thin blanket, of which he had also ripped a piece off to use as a headband, as his hair kept getting in the way of his face; and a slot for meals, where they end up being delivered, and a water supply. But there were no bathroom services in here, and if prisoners did need to go, they would have to wait until the daily transport to the bathroom facilities would start, and each prisoner had a measly five minutes at a time in each unit, only happening twice a day.

Ace felt a lot more refreshed now though, after getting to eat his first meal after days of hurting and being in cryosleep. The food here wasn’t very nice as expected; being that he was used to the gourmet meals he had every day at DreadZone. But it was enough to keep him alive. Most of the bruising had healed by now, however he still felt a bit limp and not in any mood to exercise. He was beginning to lose muscle mass over the coming weeks because of it.
Even then his mind was constantly thinking. It still wasn’t clear on what was going to happen to him, he hadn’t even been sentenced for the crimes he committed, but he assumed that he was going to spend the rest of his life here for what he did. He felt confused. Unsure if he should feel guilty… angry… depressed… disgusted… he really didn’t know. 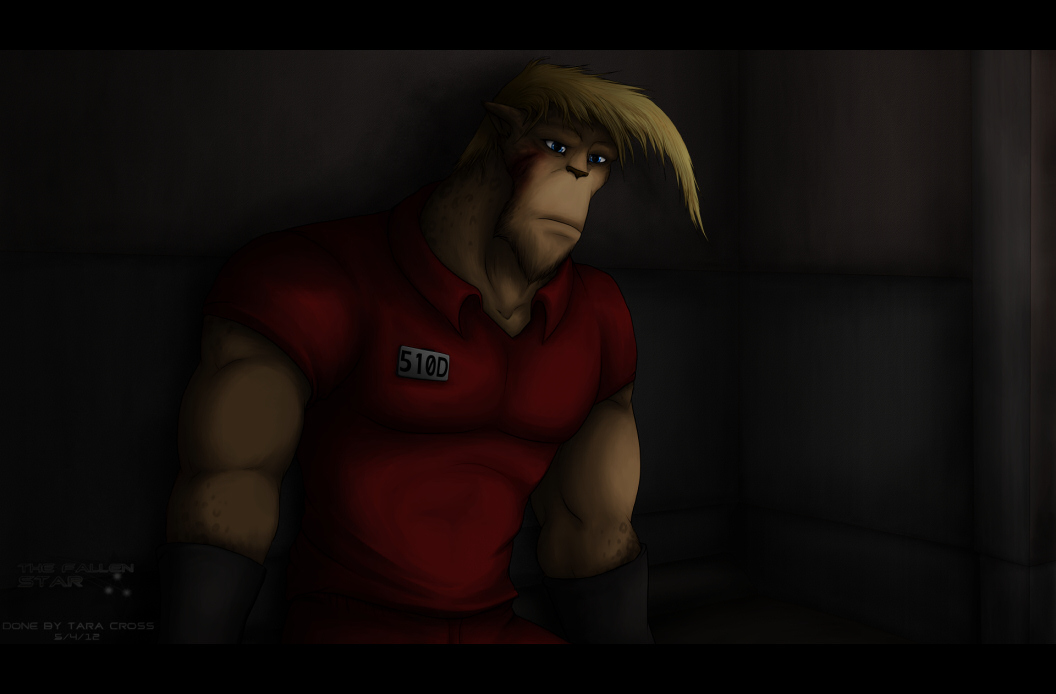 At times, he felt angry at the lombax. After all, if it weren’t for him, he would still be in DreadZone, where it was rich, relatively clean and comfortable. But, at the same time, he felt grateful for what Ratchet did, or else he’d be stuck at DreadZone for the rest of his life - murdering more heroes as they came in. Becoming even more disliked than he already was and causing more stress to everyone and himself.

The demons in his head kept fighting. He had been at DreadZone for six years; so it wasn’t all that easy for him to stick to what was right, and what was wrong. But as more days, weeks and months passed by, he slowly began to accept that he was in the wrong. Ever since winning the grand championship of the first season, and allowing himself become Gleeman Vox’s ‘tool’…

What the hell was I thinking…?