Ace felt a choking feeling in his throat. His heart was racing as well - his nerves unable to calm down. What the heck was he getting himself pulled into, he thought.
He tried best to hide the anxious feelings within as he walked with the others along a hallway. Ace could see that he really was inside the old Sonic Starfighter, but it had been changed around drastically. Yet he recognized where the rooms and hallways were located as he walked by them.

Going face to face with Jake and Jenna made him feel the most nervous. When he was young, they were almost like siblings to him. Being the same race, and spending a lot of time growing up and training together. Jake especially was like an older brother to him during those days, at least until he grew a lot bigger than Jake himself.
He had a harrowing feeling that they both won’t forgive him for what he did at DreadZone, and he couldn’t blame them. He felt very uncomfortable about seeing them in person…

At last, they arrived to the centre part of the starcruiser. Betty and Aster moved away to the side as Ace stood there with Kurt, still nervous but managing to keep a very straight face.
The markazian walked over towards the hallway ahead, and Ace waited there, for what was to come.


Kurt waited by the hallway and Ace’s ears picked up the sound of a doorway opening up in there.

He was truly nervous now.

First, he could hear someone walking down the hallway and out into the lounge. He almost gasped, and straightened his posture as he saw the creature that came out slowly, to greet him.

It was Leera Lashclaw; and she was enormous, nearly twice the size of what she was last time. Her horns were much longer, protruding forwards from her skull. She also stood around the height of Ace’s shoulder.
Leera looked very wary of his presence, but not aggressive. She slowly walked up to Ace with her head held down low, sniffing the ground as she got closer to him.
Ace didn’t do anything but stand still, keeping his eyes locked on her as she continued to snuffle about, before stopping and lifting her head up to Ace’s level. Her large dark brown eyes stared straight into his blue ones. She then gave him a gentle nudge at the face with her nose and a calm growl. It was a sign of affection. 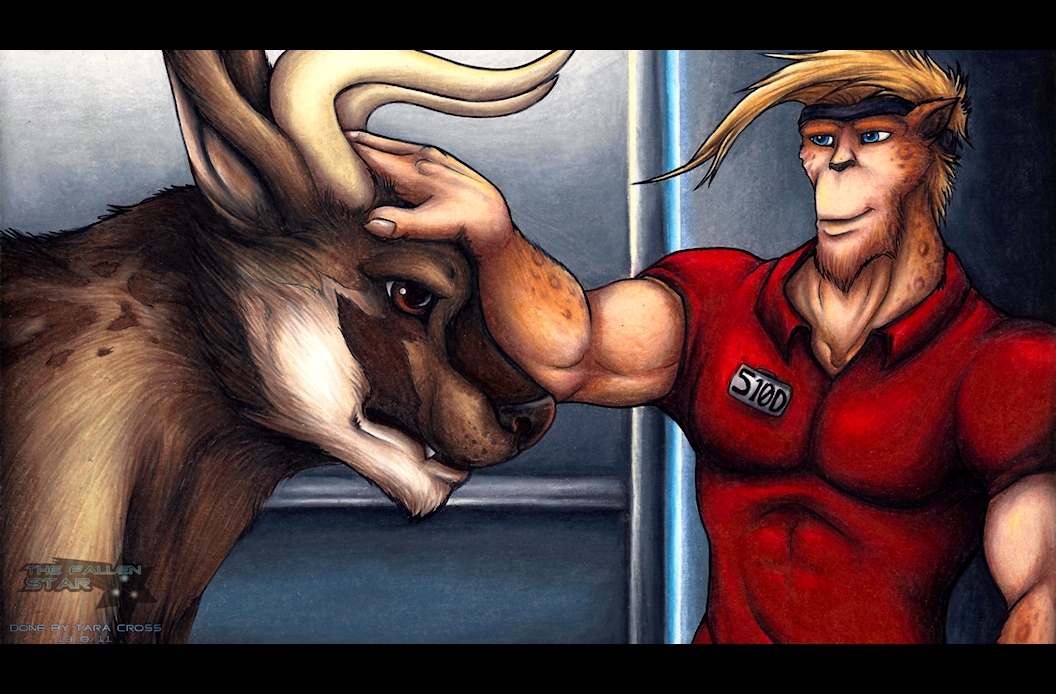 Ace grinned back and placed his hand onto her head, petting her.

”Heh, looks like you still remember me Leera. You’ve grown a lot…”

A male voice called out. The Maulkat suddenly turned her head and padded off quickly back to the hallway.
Ace immediately recognized that voice, and he could see Jake Jetspeed standing at the hallways entry. Ace was surprised to see him there.
He looked different as well, in more casual looking clothing without any visor on his head nor a superhero suit for that matter. Jake looked a bit older as well, seeing as he was now in his thirties but despite that, his facial features and hair style was still largely the same.

”Keep away from that monster, okay? You should know better than that…”

Jake told Leera. His sentence was quiet, but Ace heard it; and it did hurt.
He looked away from Jake and didn’t respond right away; aside from giving off a mild frown. But he wanted to at least say something to him that could maybe make the mood better.

Jake didn’t say anything of course. He stood there, folding his arms, exchanging a glare full of hatred. Although he wasn’t showing his fangs like male verpardi usually do when they’re being aggressive.
All of a sudden, another person came out from the hallway entrance quickly and stormed up to Ace in the centre of the room. But before Ace could look to see who it was, he was hastily smacked on the side of his face with a loud slap reverberating around the room.

”THIS is what you get for leaving us-“

A stern female voice shouted, and Ace could see who she was. Obviously Jenna Joltstride, but he wasn’t given much time to respond, as her other palm came around from the right to slap him across the other side of his face.

”-and THIS is for killing all those heroes”

The second slap to the face was quite hard, already giving him a slight stinging sensation and he backed off to quickly stand up, wanting to reply.

”-and THIS… is for making us believe you were dead…”

He was kicked directly between the legs in such quick motion, that he almost didn’t notice she had actually kicked him at all. He flinched and clenched his teeth together tightly, shutting his eyes and trying his best not to growl or groan; despite how painful it actually was. He was still in his prison scrubs, so he had no ‘protection’ in that certain area.
He almost fell to the floor but he managed to keep on standing, gingerly placing his hands around the now sore area. He was crouching over slightly though, but looked back at her to see how she had changed.
She looked a lot different, a bit taller than before with an entirely different outfit to what she used to wear. Her facial structure was largely the same, but slightly more mature looking – due to her age.

She walked away from him without looking back, while Bettilena looked sympathetic, both hands over her mouth. Aster could only stare back, wide eyed.

”Ooohh… right in the asteroids…”

Everyone but Ace was in the dining room of the starcruiser. It was around midday now, so they were having lunch. There even was an extra plate for Ace and a seat; as they all waited for him to come in.

A few minutes later he came in through the doorway. He was in a more casual outfit now: a tank top; track pants and boots; not the prison scrubs.
He felt extremely awkward and uncomfortable arriving into the dining room; only Betty smiled back, while Aster and Kurt simply looked on. Leera was a few metres away, eating from her own bowl on the floor while Jenna and Jake didn’t even take a glance of him.
Ace went to go and sit at the spare seat and immediately, the other two verpardi took their dining plates and left the room.

He sighed as he sat down with the remaining team members. He stared down at the table as he sat there, deep in thought.

”Don’t worry Ace. They will eventually accept you…” Kurt told him.

”I don’t know about that. They’re quite angry with what I did and I don’t blame them, really…”

Ace suddenly believed this was a bad idea - being let out of prison. Kurt felt sorry for him, as well as Bettilena. Aster didn’t really take too much notice of his feelings on the other hand.
Betty couldn’t help but notice Ace’s facial differences now though; feeling slightly concerned as she noticed what was on the side of his face.

”Ace… how did you get those scars? They look as if they were very deep wounds. Please don’t tell me you were… tortured in prison!?”

”No, I wasn’t. I don’t even remember how I obtained them, but it happened before I was sent to Zordoom. We weren’t allowed nanotech or stitches, so it didn’t heal properly”

”Aww… I’m so sorry to hear that” she said, giving off a sorrowful look.

”Bettilena, I appreciate your kindness and all but really? Do you think I deserve the sympathy that much? I screwed up, big time. There is no reason to feel sorry for me; I deserve it”

”Well, we all make mistakes in life Ace. I still believe it was that Glee-shark who is responsible for your gladiator mishaps!”

”Maybe, but not all of it. It was my fault that I allowed him to take advantage of me… but those days are over now”

”Yeah, after a little lombax kicked your arse”

Jake’s voice called out from the kitchen’s doorway. Everyone guessed he was standing nearby, listening to their conversation. Ace looked away from the doorway to try and not take notice of his verbal attack.
Kurt stopped eating for a moment, noticing Ace still hadn’t started on his own plate. Ace saw that Kurt was watching him again, and he wanted to know more on what the team did while he was gone.

”Kurt, what happened to everybody after I left? I hope the authorities weren’t so hard on you all after… what happened”

”Well the justice system never had enough evidence to prove that it was us who… were responsible for that destruction. You probably knew already but they all believed that you were responsible; because you disappeared from the public eye. Thus, the authorities thought that you were on the run from justice. Of course we know that isn’t true, and so we were sentenced to 10 years community service”

“… Just like Slim told me. I’m sorry you all had to go through that”

”It is okay Ace. Community service isn’t a bad thing - it involved us all working for various communities on different planets. As long as we are helping people, we were well in spirits. But we’re no longer known as the Sonic 6; we gave up our superhero lives after you left. We are now called the Six Seekers”

”Yes. Around halfway through our sentence, the Judge noticed our good behaviour while we did our community jobs and they gave us back our Sonic Starfighter, with all the weapons removed of course so it was no longer a Starfighter. It’s just an ordinary spaceship called the Star Seeker… but it is still our home; and yours too”

Ace now knew how the team were doing while he was away. He felt very relieved they didn’t suffer too much after the Bolden 3 accident. Although he did feel a slight hint of bitterness though, knowing that the authorities blamed and wanted him for the destruction of his home planet back then.
Ace really didn’t believe it was him and his team who were responsible but of course – he still had no proof to back it up.

However, he did take full responsibility for his actions while being an Exterminator at DreadZone. He didn’t like to think about it, especially now that he was back with his old team again. He felt ashamed whenever the thought came across him, especially when Jake and Jenna would scowl at him when their eyes met his own.
It was hard to be around everybody again; he still felt uncomfortable in many ways with the whole idea of it. But it wasn’t all bad, he thought. At least Kurt and Bettilena were being supportive in one way or another – and of course, having his own room and bathroom again was pleasant, as well as the delicious meals that Betty prepares.

But despite all that, he still felt very out-of-place… and he could only wonder what was going to happen in the upcoming weeks.

Chapter 26: Put to the Test