During the following day, Ace was hard at work on his next project – Jenna’s new weapon. He already had the perfect idea in mind for her; an electricity based weapon. But yet, he wanted to make it original, nothing similar to those sold by Gadgetron and Megacorp.
Although he remembered a certain weapon by Gadgetron; a weapon from their ‘Gold Range’, highly sought by many within the Solana Galaxy. As a youth, he owned a certain Gold Weapon - only to take it apart for building purposes of his own and as he did, he learned a lot from it.

He was quick to work. Tools, metals and many various parts littered his workshop table as the minutes and hours rolled by. The weapon’s interior started to take form from his constant welding, screwing and handling. He inserted specific power capsules into the core of the weapon, already giving it a bright glow of green. This gave him a satisfied smile; as it was a sign that the weapon was halfway complete. All that there was left to do was the exterior, and then after that – the programming.

He spent another three hours working with it in the main workshop of the Star Seeker. He moved here to use other high tech equipment. Such as the Ion-saws that could cut through most metals. He used this very saw to cut the metals into the right, symmetrical shapes for use, before adding them to the weapon. He finished adding the final touches to it, such as areas the lights to illuminate when the weapon was activated.
He sighed in relief once he was done; taking off his visor and wiping his forehead. He looked at the weapon laid out on the desk, picking it up and examining it closely with his own vision.

He wasn’t done yet. He still needed one more touch; for the programming side of it. He was about to leave the room, until he saw that the person he needed was right there before him.

”Somebody told me you’ve been up all night working in here. Those Ion-saws can be quite noisy you know. What’s up?”

”Heh, nice of you to show up at the right time…”

Ace walked back to his desk to grab his newly made weapon. Jenna stared back at him, and remembered something from the day earlier. She had a surprised look on her face, as Ace showed her it

”Told you I would make one”

”W-What? You finished that just now?”

Ace gave a nod, before looking back down at the gun. He appeared to be quite proud of it, marvelled by the freshly cut metals shining from the lights in the room.

”Well uhh thanks, but no thanks…”

”Well uhh…”
Jenna was unsure what to tell him.

”I slaved for hours over this thing and this is what I get? Man, you’re cold…”

”Hey it’s not like I begged for it! You could always give it to someone else in the team; they’d be better off with it anyway. I’m just not that good with those kinds of weaponry…”

Even though Ace tried to look tough, he felt rather unhappy and disappointed on the inside. Jenna looked back at him and even though he hid his mood well, she could somehow see it in his eyes. She looked down to glare at the weapon which he had made and she had to admit, it was quite a fine looking gun, sleek in design and rather shiny too - a lot different to his bulky, bladed HL Launcher.
Jenna sighed, turning around with her arms crossed.

”Okay, I’ll take it. But I can’t promise that I’ll be any good with it though” she told him.

”Sweet. There is one more thing I need though, before it is a complete weapon”

“You mean, it’s still not finished? What do you need?”

”I need your touch”

Jenna went quiet. Her eyes were wide open, even more so as Ace shot up right behind her with the weapon in his right hand. He used his left to gently place her much smaller hand onto the handle of the weapon and with that, the weapon started to activate. Jenna looked down, quite amazed with it. She also placed her other hand onto the weapon and Ace looked down. She was holding the weapon and now it was fully functional and active, he was pleased to see it working as planned. The lights shone a brilliant green colour, along the centre of the weapon - as well as illuminating the power metres on both sides.

”Now it is all yours. Nobody else can use it, not even me. Unless, I break it and take it apart of course”

”So, this can be used with my own mind then, just like your one?”

”Yeah, in a similar way. You don’t have a high-tech visor though for improved precision, but I don’t think you’ll need them for what this weapon is capable of…”

Ace was very pleased with it, he backed away from her slightly and she turned around, holding the weapon up and looking at it closely with her own two eyes. He stared as she examined it, noticing something- 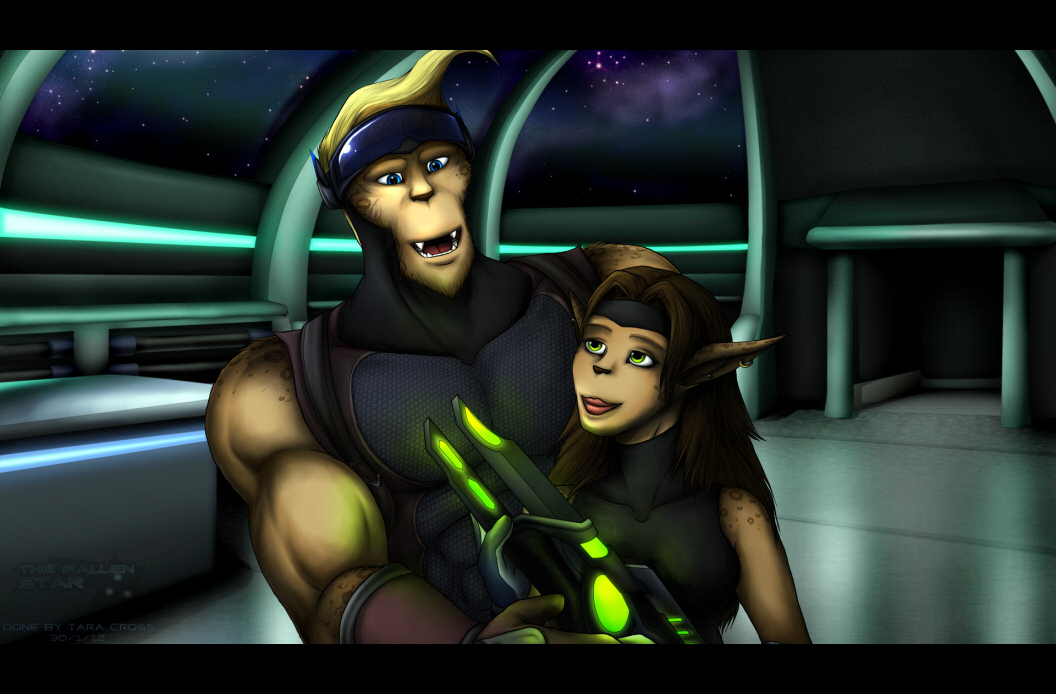 “It goes with your eyes”

She looked back at him, bemused by his compliment. He meant it though; noticing the green lights from the weapon matched up with her green coloured eyes. Jenna smiled, looking back down at the weapon, noticing the small switch on the side. She pressed it, noticing that it was indeed, the switch to transform it into compact mode.

”Looks like you already know your way with it, heh”

“Thanks Ace. This is very kind and thoughtful of you to do this for me. I don’t know what I’ll do with it yet but… a gift is a gift and I’ll be keeping it, nonetheless”

”That’s all I wanted to hear. But I know you’ll need it someday, just you wait”

She walked over towards the exit of the workshop room. She looked down at her new weapon again, thinking to herself.

”Oh yeah, the name of the weapon. I call it… the Static-Strider. You’ll see why once you try it out for yourself”

”Hmm sounds interesting. Thanks again Ace. I’m off to hit the hay now though and you look as if you should do the same”

Ace stretched himself out, spreading his arms and yawning as well. He walked to the exit as well and out into the hallway. Jenna was heading in the opposite direction to him, back towards her part of the star cruiser. She looked back at Ace who met her gaze.

First thing next morning, Ace was at it again amongst his tools. Building the Static-Strider left him in a very good mood, and he was inspired to make himself a new weapon too. He would still keep his HL Launcher of course, but he wanted to make something else to use – for the fun of it.

He liked the idea of having a dual-styled weapon - something similar to Jake’s pistols and a certain weapon he remembered from DreadZone, called the Dual-Vipers.
Of course, he didn’t want to copy those designs. But he did like the idea of having a weapon that used metallic bullets, rather than power capsules, lasers and plasma for a change. And so, he was quick to get to work.

He started designing in his room again of course, sorting through his many different types of metals and weapon pieces, and carefully picking out the right shapes and types for what he had in mind.

He worked all day, right from the morning. The only breaks he had were for lunch and dinner. He even forgot to do his daily exercising as he was much too focused on building his new weapon. Ace was enjoying it, and had already made his way into the workshop again to use the high-tech equipment.
He wasn’t alone this time though. Leera Lashclaw heard what was going on and made her way into the workshop having heard him work from her den a few rooms away. She sat on the metallic floor in contentment, appearing to be rather intrigued by what Ace was doing with the welding laser and Ion-saw. Ace usually didn’t like people staring while he worked, but Leera was an exception - her being an animal and all. And that she also kept to herself in silence.

It was good to have a bit of company, he thought.

He was close to finishing his new set of guns. Time rolled by so quickly that he hadn’t even noticed it was almost the morning. Being in the depths of space, time was rather hard to keep track of unless you checked the clock every hour or so. Leera had already left hours ago to sleep in her den and no footsteps were heard throughout the whole entire star cruiser.

By now though, Ace was feeling very tired. He didn’t want to rest though until his new weapon was complete and so, he continued to apply the final touches. He put on his visor to test the mind control capability, aiming feature and ammo capability.
After that, he was satisfied with the results. All he had to do now was test its effectiveness against targets and foes but for now, Ace was much too tired. Yawning every minute or so, and finding it even more difficult to keep his eyes open.

He slowly made his way back to his room, holding the new pair of guns. As he entered the room, he placed them onto the nearest table. He looked back at them and grinned to himself, quite proud of his latest creation but as soon as he caught sight of his bed he gave way and collapsed onto it, falling asleep in an instant.

”Hey Jenna, check this out!”

Jake said, standing at Ace’s doorway, giving off a snicker at the sight of what he saw. Jenna came walking down the hallway towards him.

”Just look at him! He looks like a passed-out drunk!”

Jake was in stitches and Jenna also couldn’t help but chuckle at the sight of it as well. Ace was in a deep sleep but it looked as if he’d slip off the bed anytime soon, with one of his legs off the bed as well as an arm.
Ace looked like he was in a good sleep though, and Jenna looked over to see his new weapons at the nearby table. She smiled and as soon as Jake left, she walked over towards Ace.
He was slowly slipping off, so she lifted his loose arm back onto the bed, before doing the same with his leg that was hanging off the side. He was quite heavy but she succeeded in lifting the rest of him back onto the bedding; looking back at him and smiling cheerily. Ace was still fast asleep, not disturbed at all.
She left the room shortly after, closing the door on the way out and leaving him alone in peace.

He didn’t wake for the remainder of that day.