Another 3 months had passed and the galaxy was still in a relatively tranquil state – no illegal gangs running amok, no supervillains causing widespread chaos… nothing.

The Seven Seekers were not complaining, however. Even Ace didn’t mind the lack of doing heroic activities. It was enjoyable living with the team, and he had no regrets whatsoever for deciding to stay with them again. He was very grateful for what Kurt had done for him and if it wasn’t for Kurt, he would have been stuck in Zordoom prison for the rest of his life. He began to develop some new feelings as well, after living close with the team for 6 months. Some of which felt quite odd, that he didn’t quite understand. But despite that, he continued to enjoy his time here.

It was pleasant living with them, and now he could truly feel his life moving on and away from the dreaded past he once lived. Ace also tried his best to stay out of trouble and so far, it had been effortless. He rarely came into contact with the public eye anyway.
Yet at times, he did wonder where Ratchet and Clank were in the universe; none of the team happened to know of their current whereabouts. They were possibly fighting evil in another galaxy - or even just relaxing out there, like Ace and the Seekers were doing so as of late.

Even so it wasn’t long until boredom struck the team. They had already finished their 10 yearlong Community Service sentence, so they were free to live their lives in freedom. But even so they wanted to do something to help out, and so they began to look elsewhere, outside of the Solana Galaxy…

Everybody sat around various parts of the Star Seeker. Kurt, Aster and Bettilena were in the pilot room, keeping control of the star cruiser as they travelled around the depths of space. Kurt and Aster both scanned the galaxy for any possible distress calls, whilst Betty browsed the nearby computer for any news of a nearby disaster. But so far, there was nothing worth investigating.

Meanwhile, the remainder of the Seekers were in the lounge area. Ace had just finished his daily exercising a short time ago, sitting on the couch. Jenna also sat on the other couch nearby, with a very bored looking Leera lying in front of her on the floor.

Jake was absent for the time being, and so Ace took control of the nearby remote. A large Holovision screen was centred on the wall and he flicked through the many channels…

”I don’t get why so many people watch this trash. There is hardly anything good on HV these days! And it is full of commercials”

“I only watch a few shows, when they’re on air of course. But ever since Captain Qwark became a movie star, all his trashy adverts began to plague the channels…”

Replied Jenna; looking equally as bored. Ace shifted his eyes at hearing the name of Qwark as well.

He said, continually flicking through the channels and becoming more irritated with seeing Qwark’s face on the various networks he flipped through. Many of the commercials were advertising for his ‘My Blaster Runs Hot’ Movie, as well as ‘Unicop’.
Ace tried viewing some old favourite channels such as Annihilation Nation, The Megacorp Games and other legal gladiator shows. But they were either full of adverts or unskilled contestants who were being obliterated before they could even begin to compete. Ace sighed, turning off the Holovision set and turning around to lie down on the couch sideways; utterly bored out of his mind.

That was until Jake entered the room.

Ace felt something land on his chest, startling him a bit. He looked to see that a magazine of some sort was there, thrown on him by Jake.

”Here you go Ace, I found this and I thought you’d be interested! You do look a bit bored, after all!” 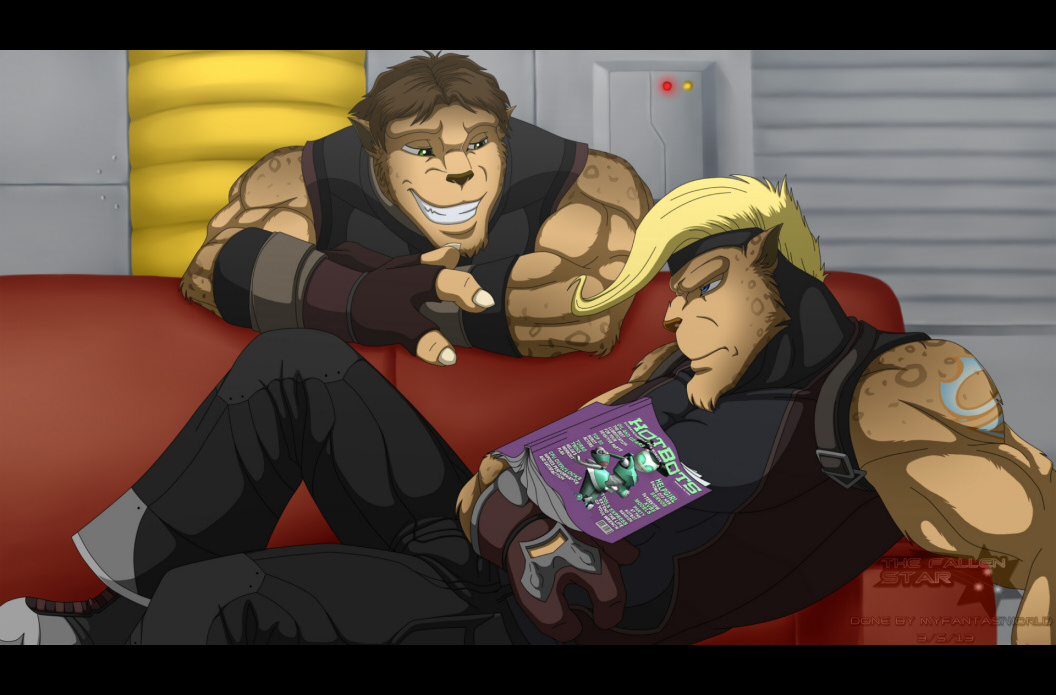 Ace got up and grabbed the magazine. He was quick to roll his eyes in annoyance at viewing the very cover of it. ‘Hot Bots’ it read; he then tossed it away while Jake smiled back cheekily.

”Uhh… no thanks” said Ace with a blank expression.

“Hey what are you doing? I thought you were into fembots!”

”I am not, so there. Go and annoy somebody else for a change!”

“Hey, there’s no need to be shy with us, we totally understand it-“

”When will you get it through your thick head?! I am NOT a robosexual!”

Ace yelled, slamming his fist on the nearby table. Jenna stared at both Jake and Ace, and couldn’t help but giggle.

”I often wonder why so many organic guys in the universe drool over female robots. What’s so great about metallic curves and jugs? It’s freakin’ weird…”

Stomping was heard and in an instant, Jake yelped after receiving an unexpected slap around the head. He rubbed the back of his cranium looking stunned.

”Don’t you dare talk in such a rude manner about robotic woman ever again!”

Bettilena yelled, holding up an odd and exotic looking piece of footwear, known as a jandal. It was one of her weapons. She had her hands on her hips, before turning and walking back towards the control room.
Ace and Jenna were both quiet, completely unsure if it would be appropriate to laugh out loud but Ace, thinking it was hilarious, cracked a slight smile.

As the minutes rolled by, Kurt walked into the lounge area. Ace looked up over at him, as did Jake and Jenna.

”Alright everyone, you may want to come and see this”

The Seven Seekers all stood around in the main room of the star cruiser. Looking up at the holovision screen, it showed a news report from another Galaxy; known as the Bogon Galaxy. Planet Endako was under attack by a gang of villains and it appeared no local superheroes were called in to help fend off the attacks.

”So as you can see here, trouble is brewing at quite an alarming rate. And they appear to not have enough support to control the situation”

”Well, I say this calls for another mission then. It has been ages since we fought against foes, am I right guys?”

Aster said right after Kurt. Everybody in the room agreed, giving off nods and already preparing themselves for the intergalactic flight. Sitting down in their seats and bracing themselves.

Ace looked up at the news reports again to see where the source of the problem was coming from. He could notice a familiar race of villains from the past, known as Thugs.
The Thugs were a well built, reptilian, anthromorphic race, relatively common in the Bogon galaxy. Their scales were dark purple or green in colour, with sharp claws, spikes and a tail. They also wore armour, were well armed and came in a variety of different classes. Although quite strong, many were not very intelligent and couldn’t think well for themselves.

They were trying to break through into the centre of Megapolis on Endako to the city centre bank. Their intentions were unknown at this stage and Ace was curious…

He had fought in the Bogon galaxy as a teenager, during his heroic years. He even remembered fighting Thugs. But the Thugs wouldn’t attack at all unless they were hired by a high paying supervillain or any other wrong-doers to do a specific task. They were part of a group called ‘Thugs-for-less’, an illegal business where people could hire assassins, soldiers and other types of thugs to do their dirty work.

“Are you sure we should go into the Bogon galaxy without any given request? Like, shouldn’t they have their own local superheroes and authorities there to help them?”

”It has been many years since we visited Bogon, so they are probably not aware of our service aid anymore. Don’t you think they would appreciate a helping hand?” Kurt questioned Ace.

Ace said following Kurt, everyone all braced themselves for the fight… laying back and starting out ahead of them…

And in a flash they took off into hyperspace.