"The Fallen Star" is a fanfiction story based on the life of Ace Hardlight; it is written by me (Tara Mckee) with the help of Laura (HuskiBunni).
It is a fanon story that follows the canon of the games events and characters very closely, but from Ace's perspective all throughout. The story sets around the time of Ace's midst of being a superhero, right before it takes a turn for the worst... in which he becomes a 'victim' of Gleeman Vox's DreadZone show.


I was relatively new to the "Ratchet & Clank" Franchise at the time of 2009 and so, The Fallen Star was only just thought of back in December 2009. Very late, considering the fact that Ace Hardlight appeared in the 2005 game, Ratchet: Deadlocked (Ratchet: Gladiator for PAL regions). I have answered a bunch of questions that you and other fans may be curious of so... here they are! 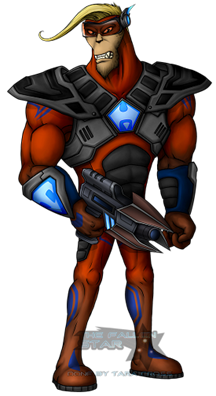 What inspired you to start this story in the first place?

Well it all just came out of 'nowhere', to be honest.
It wasn't only Deadlocked/Gladiator that inspired me, since I used to prefer playing the first 3 Ratchet games instead. I do however, like playing Deadlocked with Co-op mode!
But after browsing the Ratchet Wikia site, I read about the characters more and also read about Ace. And for some reason after learning about his past and the Sonic 7, something clicked in my head.

I didn't care too much at first but it kept bothering me at the back of my mind, and I kept going back and thinking "hmm..." and yeah; something in my head kept nagging and me saying "DO A STORY FOR HIM!" over and over! And I kept saying to myself "No way, that won’t work. I can't do that! I'm a Crash bandicoot fan! No one likes Ace anyway!" but I finally gave in and decided to start it. There was just too much good ideas to disregard!
This is also the reason I became so inspired to do all the random Ratchet artwork in December 2009. I just kept the rest secret until April 2010, since I was a bit shy and unsure about it. And soon, Ace become my favourite R&C character, I just didn't care that he was unpopular anymore!


Why Ace Hardlight? He's a complete douchebag and he died at the end of Deadlocked!

Yes I know he is a dickhead in Deadlocked, but for some reason I don't care and I think a story about him would be good and I just think he's interesting, can't help but think that way ;p
And I also know he's was once, one of the most disliked Ratchet characters. But then again, I don't care. Since I only do my artwork and writing for fun, I don't really care if people dislike it or not, nor how popular the character is and yes, he is my favourite Ratchet character so there 8P.
I just want to write about how he was while being a Hero, and also his bad days at DreadZone and what caused him to be like that, his time at the prison and then what he does after being released from prison.

And for those who think he died in Deadlocked, well you're wrong. At first I thought he was dead too until it is confirmed that he's been sent to Zordoom Prison, makes sense since it didn't look like he was dying after Ratchet defeated him anyway, and Vox would have just made a publicity stunt by saying he's dead, so that the Ace merchandise would 'hopefully' sell more (Since sometimes when a Celebrity dies, their stuff sells more)

It's also confirmed that he's released from prison during Crack in Time, no idea why though (especially so early) but I wrote my fanon to explain that, heh. 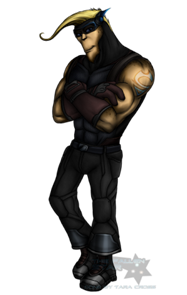 Why is Ace Hardlight your favourite character?

I should have added this answer a lot earlier - silly me!
Well lets see... to be honest, I actually played Ratchet: Deadlocked/Gladiator long ago but never took much notice of him. Didn't like or even hate him. Until sometime in December 2009 while I was browsing the R&C Wikia and finding out more about the characters. I kept hearing that Ace survived and I was curious to find out more about him. Then I came to learn of his past; with the whole Sonic 7 and Bolden 3 thing and I just thought it was so interesting, and then I started to like him as a character and artistic muse.

The main reason I like him is simple - because I can see potential in him. Potential that I can work with and so... I started The Fallen Star!
I also do like his voice, his design, his story, his abilities and even his easy-to-dislike attitude. I do love his design especially, it's just so unique and cool looking to me; different to what I usually used to draw. I don't care if he's not a fluffy anthro like Crunch and others, I still like him. He has muscle, skills, vanity and style, heh. His personality may piss people off, but for some reason I don't get pissed off. He's so imperfect and that's another thing that makes him very fun to write about and develop a bit more. Far more interesting than writing about oh-so-perfect characters, and characters who already have a lot of development.

So there... those are my reasons!

Will this be an Outcast Bandicoot adaptation for the Ratchet and Clank series!?

Hell no. This story is nothing like OB, really. And I don't plan to make it into a series, it's only going to be a one off story about him, and it is quite a long story at that. The only OB similarities are that it follows the life of a different character, but makes references to the canon-games (Like how OB follows Crunch and the first 4 canon Crash games) but Ace and Crunch are very different to each other as characters and have much MUCH different lives, so it obviously wont be a OB Ratchet!

The Fallen Star is a far better story in all ways too. And I'm not being biased.

Will this story be depressing, violent and angsty?

Ha ha! Well not entirely. There is obviously some depressing scenes, because  the story goes through the moments when he was heartbroken; after the big accident his team was involved in (before DreadZone) and his days at DreadZone aren't the prettiest (well, that place is obviously violent and ruthless. Just doesn't show it onscreen in the game!)
However, there is still a load of humour and light hearted scenes added to the story (Come on, Juanita and Dallas are there), and how he was as a hero and his road to redemption later on. But it can still be dark and quite serious at times.
I'm hoping to make this story have a good mixture of every genre, such as action, humour, sadness, violence, darkness, adventure, romance, happiness, etc. But the main genres with be Action and Adventure, with a good mix of humour, violence and emotion thrown into it and the other genres here and there..

And there is absolutely NO adult/sex scenes; sorry pervs. That just isn't my style when it comes to writing, and I don't need adult content to make a great story. 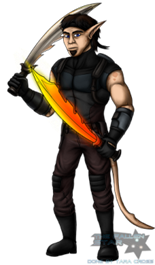 Why did you design the Sonic 6/7 as you have? Why a Valkyrie, Blarg and Markazian in the team?

Well yeah, I know it may be a weird combination of characters to some people but I chose them carefully. I didn't want to make the team 'too normal', 'too pretty' or 'too wacky' so yeah, heh. And there are reasons for why the team members are who they are, and each and every member has their own unique personality, roles and skills. So none of them are useless. And since there is nothing known about the Sonic 7 (besides Ace), I had to make them all up from scratch. But once you read the story, you'll see how they all fit in together and work out.

What parts of 'The Fallen Star' are actually canon/official?

Go to the Wikia page about Ace to see the basic outline of the whole story right here. or if you don't trust the Ratchet wikia, then here's the prima guide here. I basically followed that and well, just expanded it (a LOT, lol) I had to make up the whole Sonic 7 team though, of course. And added many of my own ideas though, here and there. But from that Wikia page you can see which ideas are canon and which are made by me (when the story is done). Ratchet Deadlocked is also a major part during the start of the story, and I'll follow that game as much as possible, but from Ace's perspective of course. But it wont just be all about Deadlocked, there is much more things that go on before and after that (Deadlocked scenes are about 1/3 of the story)...

Why didn't you chose to do a story about something 'cooler' from the Ratchet series, such as the Lombaxes?

Because I didn't want to, didn't have any good, unique ideas for that anyway AND there is already thousands of fanfictions out there about Ratchet and the lombaxes XD I also felt that it isn't my place to get in-depth about the Lombaxes, since I feel that the people at Insomniac still have more to tell about them and that's it's their focus, not mine. And I don't really want to 'follow the crowd' with the cool and popular Ratchet related stuff anyways, I just like the idea I have come up with; and that's what I'll be focusing on and developing more for the fanfiction. However, I think a story about Kaden, his 'wife' and Azimuth would be sweet, but alas, there's already lots of people doing stuff for that and we don't know Ratchet's mother (yet) XD!

Where are all the other characters in the character area, such as Dr Nefarious, Alister Azimuth, etc?

They don't appear in the story... sorry :S even though I do think they're cool. But yeah, they don't have roles but some will be mentioned at least. The reason why I'm not using them is simply because they're more relevant to Ratchet's adventures and life, not Ace Hardlight's and the Sonic 7. There are also many other characters mentioned throughout the story, but I only made profiles for the ones who appear or are mentioned more often and are important to the storyline.

Why do you make up and add the character sizes (weight, height)?

Because as an artist, it helps when comparing the characters sizes (especially heights) when you draw them together in the same picture. it's especially important with animation too. So yeah, it's just for that purpose, and people are curious of that information anyways and I like to add it (or make it up for canon characters if I have to, heh)

Begin to read the story
Return to Home